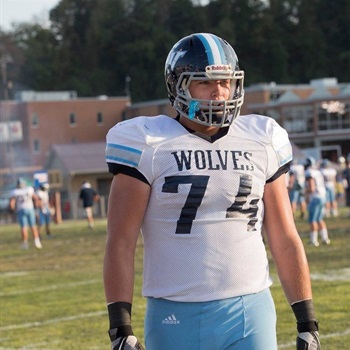 One of the final potential pieces to Ohio State’s 2019 recruiting class has decided to go elsewhere.

Four-star offensive guard Doug Nester told The Herald Dispatch on Tuesday night that he will be signing with Virginia Tech on Wednesday after being committed to the Buckeyes for the last 18 months.

Nester committed to Ohio State in August of 2017 but once Urban Meyer announced his retirement in December, he decided to not enroll early with the Buckeyes and look at all his options.

The offensive lineman took visits to Penn State, Ohio State and most recently Virginia Tech on Saturday before finalizing his decision.

He explained why he was more comfortable with Virginia Tech over the other schools.

“Ohio State is always the best of the best and they continue to get great talent and great guys, but it’s a big city and I don’t know if I would fit in well there,” Nester said. “Penn State is a great place – a small kind of town that is a city built around its campus. The town life is great and the guys are great, but it’s a little too far. I feel like Virginia Tech is that happy medium. It’s three hours away and only an hour away from my sisters.”

The Huntington, West Virginia native was the sixth-ranked offensive guard in the country for the class of 2019 and 106th-ranked player overall.

Ohio State won’t be left empty handed however as they are still in on two offensive line recruits who will be announcing on Wednesday, which is National Signing Day.

Enokk Vimahi, a four-star offensive guard from Hawaii who is deciding between Ohio State and USC according to 247 Sports.

Dawand Jones, a three-star offensive tackle from Indiana who is likely deciding between Ohio State, Penn State, USC and Indiana.