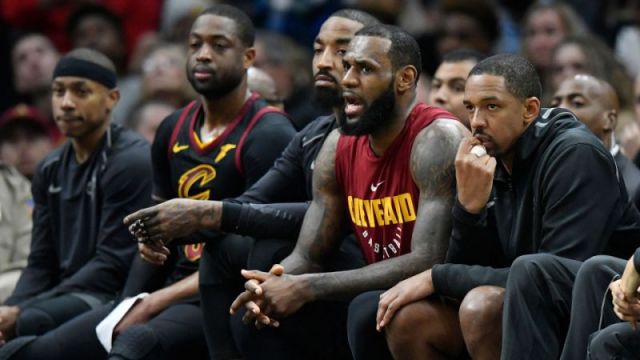 Since Lebron James’ return to Cleveland in 2014, Januarys during the NBA haven’t been kind to the franchise.

In 2015, the team was in the middle of a below .500 start at 19-20 and James took a two week sabbatical while GM David Griffin was left to upgrade the roster.

In 2016, the team had the best record in the Eastern Conference but fired their then head coach David Blatt and promoted Ty Lue.

In 2017, James reported about how the Cavs were too “top heavy” on the roster and needed depth.

After winning eighteen games in a nineteen game streak, the Cavs have lost ten out of their last fourteen games.

Now reports are surfacing about a team meeting that happened Monday where the team called out Kevin Love for leaving Saturday’s game against Oklahoma City due to an illness and missed Sunday’s practice.

According to those reports, it was an heated team meeting with a lot of finger pointing from players to other players, Coach Lue and even general manager Koby Altman.

This team needs a major shakeup and it can come in a variety of ways.

They can shakeup the lineup and rotations which is what they should be doing but Coach Lue says it’s not happening.

If I was Lue, JR Smith would be going to the bench and Kyle Korver would be starting. I’d also experiment with inserting Tristan Thompson back to the starting lineup, sliding Kevin Love back to the power forward spot and bringing Jae Crowder off the bench.

Many have called for Ty Lue’s head and even the media asked Lebron about Lue potentially getting fired. I don’t know if firing Lue would all of a sudden make things better but maybe changing up his staff and whomever is responsible for the defensive coaching which I’ve heard is Mike Longabardi.

We’re also sixteen days away from the trade deadline and the Cavs are at the center of some trade rumors as I write this.

The team reportedly is at the “one yard line” on a deal to acquire Sacramento Kings point guard George Hill in exchange for Channing Frye and Iman Shumpert. Hill can bring a scoring threat and also brings a defensive threat that the team is lacking at that position currently.

The team is also looking at Clippers center DeAndre Jordan who would give the team a rim protector that they’ve been lacking since Timofey Mozgov left the team in July 2016.

Cleveland should be looking at defensive help and I also think that everyone on the roster could be available for the right price with the exception of Lebron James, Dwyane Wade and Jeff Green.

That goes for Kevin Love and Isaiah Thomas who could be available for the right return.

If a superstar such as DeMarcus Cousins, Paul George or Anthony Davis were to become available which I believe is unlikely, then you move Kevin Love but don’t trade him for a package like Kyrie Irving got for the team last August although Stephen A Smith said on ESPN’s First Take on Tuesday morning that Love “don’t wanna be here”.

ESPN writer Brian Windhorst mentioned a potential Thomas for Hornets guard Kemba Walker swap. Thomas has completely nixed the groove the team was on with his return and it shows how much of a major liability he is defensively. I also believe he was the one who leaked the meeting story to the media.

Maybe this is all an overreaction and the team comes through this and turns the corner down the stretch but I believe changes need to happen because if they don’t, it’ll bring major implications to the future of the franchise as well as Lebron James’ basketball future in Cleveland.