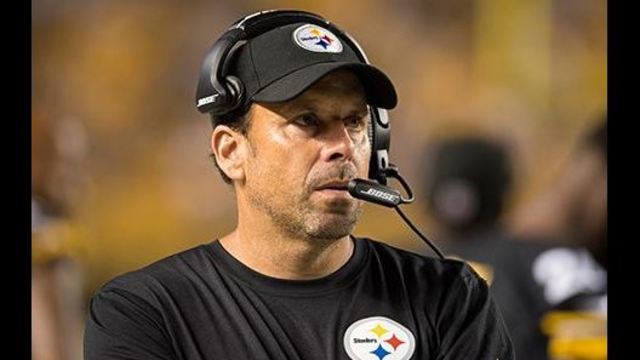 Hue Jackson will surrender the offensive play calling for the first time since becoming the Cleveland Browns head coach two years ago.

Mary Kay Cabot of Cleveland.com is reporting that the Browns have reached an agreement to hire former Steelers offensive coordinator Todd Haley to the same position on the Browns staff.

Chris Mortensen of ESPN was the first to report on Sunday morning that Haley and the team was in “serious talks” but there was some skepticism from CBS Sports’ Jason La Canfora about whether or not Jackson was completely willing to surrender the entire offense to Haley.

Haley became available last week after the Pittsburgh Steelers decided to not renew his contract after six successful seasons with the franchise.

Under Haley’s guidance, the Steelers offense finished in the top ten in both yards and points each of the last four seasons.

He’s also been reported to have clashed with Steelers quarterback Ben Roethlisberger and was heavily criticized for some play calls in the divisional round loss to Jacksonville last week.

Haley has been described by some as an aggressive coach and has been known to get into disagreements with his players during his coaching career and he says that’s how he is and he believes it’s how he motivates and no doubt it’s led him to success.

There’s also been some off the field issues including an alleged bar fight during New Year’s which resulted in Haley injuring his hip.

There’s no doubt he’s a successful NFL coach. He started as a receivers coach with the New York Jets, Chicago Bears and Dallas Cowboys of which all those stops have produced a Pro Bowl receiver (Keyshawn Johnson, Marty Booker, Terrell Owens).

He was the Arizona Cardinals offensive coordinator from 2007 to 2008 which included a Super Bowl appearance in Super Bowl XLIII which the Cardinals lost 27-23 to the Pittssburgh Steelers.

Haley also has head coaching experience as he was the head coach of the Kansas City Chiefs from 2009 to 2011 with a 19-26 record including a 10-6 season in 2010 that won the AFC West division but lost to Baltimore in the Wild Card round.

It’s a great hire for the Browns coaching staff. There’s no doubt Haley is coming in and running his offense because if he was being forced to run Jackson’s offense, I don’t think he’d be here.

The Browns have some pieces here like Josh Gordon, David Njoku and Duke Johnson but he doesn’t have Warner, Boldin and Fitzgerald in Arizona or Jamaal Charles in Kansas City or the Killer Bs (Ben Roethlisberger, Antonio Brown, Le’Veon Bell, Martavis Bryant) in Pittsburgh.

I think now that John Dorsey and the new look front office is in place, they’ll do whatever it takes to get Haley some weapons to work with on offense. They have needs at quarterback, running back and wide receiver and have the assets in free agency and the draft to bring those pieces in.

It will be interesting to see how this coaching staff takes shape because there is three interesting personalities in Hue Jackson, Todd Haley and Gregg Williams and I’m sure if things don’t start out good or great, those personalities are sure to clash.

It seems as though the team is once again winning the offseason which is also the only thing they’ve been winning these days.