Carlos Gonzalez signs with the Indians 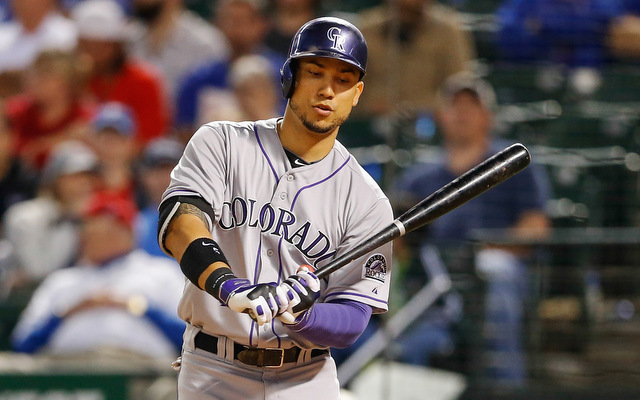 Reports out of Venezuela say that the Indians are signing former Rockies All-Star outfielder Carlos Gonzalez.

According to Jon Heyman of MLB Network, Gonzalez is signing a one year, $2 million dollar contract with a non-roster invite to spring training with $1 million in incentives. Bob Nightengale of USA Today reports that Gonzalez has an opt out in early April if he isn’t on the major league roster.

The Indians have been searching for potential bargins in the outfield and may have found one in the 33-year-old. Gonzalez spent the last ten seasons with the Colorado Rockies and now will have a chance to join a contender in the American League.

Gonzalez played in 132 games last season and showed he still has a solid bat hitting .276 with 16 home runs and 64 RBIs while still posting a .796 OPS. The power isn’t as strong as it was a few years ago but he’s still a reliable hitter and with a .329 OBP, he’ll be helpful to the Indians lineup.

Over his 11 year career, Gonzalez is a career .287 hitter with 231 home runs and 775 runs batted in. He won the National League batting title in 2010, represented the Rockies in the All-Star game three times (2012-13, 2016) and was a three-time Gold Glove and two-time Silver Slugger award winner.

In eight career games against the Indians at Progressive Field, Gonzalez is a .281 hitter with one home run and two runs batted in 33 plate appearances.

Against the American League, Gonzalez is a .324 lifetime hitter with 31 home runs and 98 runs batted in with a .929 OPS.

When looking at the Indians projected outfield before the Gonzalez signing, it didn’t look very good with Jake Bauers, Tyler Naquin and Jordan Luplow as the likely corner outfielders with the potential that Oscar Mercado, who is having a solid spring could’ve been one of the final selections to the 25-man roster.

Now with Gonzalez having two weeks to impress the organizaiton to make the roster which shouldn’t be a hard to do given the current talent in the outfield, Luplow and Naquin could be on the bubble to make the opening day roster.

Hopefully Gonzalez can provide the spark in the outfield the Tribe clearly needs.