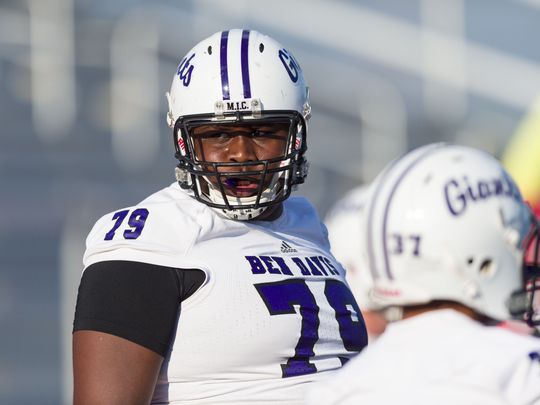 Ohio State has wrapped up it’s 2019 recruiting class with a massive addition to the offensive line.

Dawand Jones, the 6’8, 360 pound offensive tackle from Indianapolis, Indiana announced that he was signing his letter of intent with The Ohio State University on Wednesday evening at his high school in Indianapolis.

The three-star recruit according to 247 Sports made an unofficial visit to Ohio State back in November where he was offered a scholarship.

Ohio State really pushed for Jones in the last few weeks bringing him in for an official visit along with head coach Ryan Day along with offensive line coach Greg Studrawa making trips to Indianapolis to visit Jones personally including last Saturday.

When Ryan Day met with the media on Wednesday afternoon, he pretty much confirmed without saying it that Jones was going to be a Buckeye.

Ryan Day described Vimahi as a "huge addition," and said the Buckeyes are "waiting on one more here today to bring it to 85." Dawand Jones set to announce his college decision at 6:30.

With the signing of Jones, all 85 scholarships for the football program are filled thus the 2019 recruiting class is set with 17 players. 15 players have already been enrolled since the beginning of January with the early signing period now in effect across college football.

Jones along with offensive guard Enokk Vimahi signed with the Buckeyes on Wednesday to complete the recruiting class.