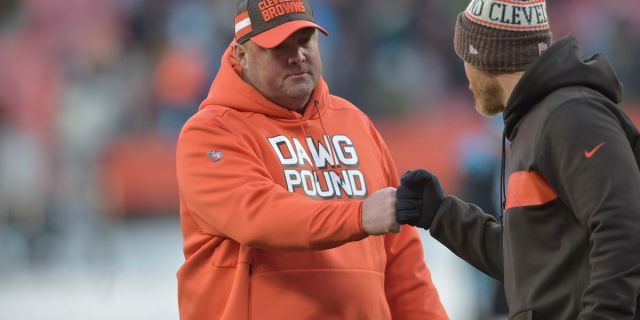 The Cleveland Browns completed their seventh interview for the head coaching position with interim offensive coordinator Freddie Kitchens on Monday.

Kitchens took over the offense when Hue Jackson and Todd Haley were fired in late October and completely transformed the offense in the team’s final eight games.

In the team’s first eight games, Cleveland averaged 21.1 points and 342.3 yards per game under Haley.

Once Kitchens took over, Cleveland averaged 23.8 points and 395.1 yards per game and although those are just slight increases than what it was under Haley, you could clearly see the difference both on and off the field.

The players spoke publicly about how Kitchens went to them asking their favorite plays and what was working successfully and he was implementing them into the gameplan, clearly something his predecessors weren’t doing for the players.

He also dialed up some trick plays that were working effectively such as Jarvis Landry throwing the football or players getting reverse runs in. Kitchens was creative and aggressive in his play calling and it was effective.

You also got to see him bring along and develop two rookies in Baker Mayfield and Nick Chubb.

Chubb rushed for 678 yards and five touchdowns on 140 carries (4.84 yards per carry) in the final eight games.

He also helped re-establish the careers of wide receiver Breshad Perriman and left tackle Greg Robinson who many thought their careers were over with.

Robinson looks like he might be the left tackle for Cleveland for the next few seasons while Perriman showed many that he can play in this league and why he was a first-round pick in 2015.

The 44-year-old coach has been in the NFL since 2006 when he started as the tight ends coach for the Dallas Cowboys under Bill Parcells.

He moved to the Arizona Cardinals the following season and he stuck there under Ken Whisenhunt and Bruce Arians for the next ten years from 2007 to 2017, coaching tight ends, quarterbacks and running backs during that span.

During the time he coached quarterbacks (2013-16), Kitchens got to coach Carson Palmer and helped revitalize the former #1 pick’s career including the 2015 season where Palmer was a second-team All-Pro and led Arizona to a 13-3 record and an NFC Championship Game appearance.

Kitchens came to Cleveland a year ago when he was named running backs coach and associate head coach and it reunited him with Haley, who he worked together with in Dallas and Arizona from 2006 to 2008.

Many wondered if Kitchens would be able to work as an offensive coordinator and I think the product that he coached during those final eight games showed that he can run an offense in the NFL.

Now many have questioned if he’s ready to take the next step and be a head coach in the league.

These are the same people that probably questioned if Sean McVay was ready at 31 years old when he became the head coach of the Los Angeles Rams. Or the same people who thought the Bears hiring Matt Nagy was a risk, Chicago went 12-4 and almost beat the defending Super Bowl champion Eagles on Sunday if not for a blocked field goal.

There’s been talk that he could be the next offensive coordinator if they hire someone else but that’s not guaranteed and if he goes somewhere and is successful as either a head coach or coordinator, Cleveland is going to look stupid once again for letting a good coach slip out of their fingers.

Teams across the NFL are looking for that next great offensive mind like McVay or Saints head coach Sean Payton, Cleveland potentially has it and can’t let it slip away.

He may not be ready in some people’s eyes but when asked about it during one his weekly press conferences during the season, Kitchens said the following:

“I mean, who the hell’s ready to be a head coach,”

There’s no reported interviews planned which means John Dorsey and the committee are likely evaluating all their options.

The fact that Kitchens may have been the final interview may be a sign that he’s the guy they like the most and let him be fully prepared for perhaps the biggest interview of his career.

If I was the Browns, I’d make it easy and go ahead and offer Kitchens the job because what he did down the stretch may have just been a sneak preview of what Cleveland is going to look like for the next decade.