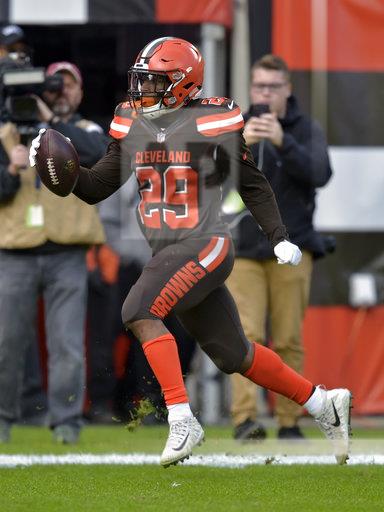 Gregg Williams’ debut as interim head coach of the Cleveland Browns went like all the other Browns coaches’ first game, with a loss.

The Kansas City Chiefs are the best team in the AFC and they showed it as they rolled the Browns by a final of 37-21.

Patrick Mahomes led the offense to three touchdowns in their first three possessions and they never looked back as they improved to 8-1 on the season. Cleveland natives Kareem Hunt and Travis Kelce scored all five touchdowns whether they were on the ground or via a pass from the MVP favorite.

Mahomes finished 23 of 32 for 375 yards, three touchdowns and an interception. If he’s not named MVP of the league during Super Bowl weekend, I think most of the NFL world will be shocked.

Hunt had 91 yards on 17 carries with two touchdowns and added a 50 yard catch and run for a touchdown on Kansas City’s opening drive. Kelce had 7 catches for 99 yards and two touchdowns.

As for the Browns, I don’t think anyone expected them to really have a chance with all the turmoil and change that has surrounded the franchise over the last week with the coaching changes but there was some positives to walk away with.

Offensively, they put up a good fight in the first half you just could see that while there is some pieces on that side of the ball that you’re hopeful about for the future, they just didn’t have enough to keep up with the Chiefs.

New offensive coordinator Freddie Kitchens had a great game plan and I think called a good game for his first regular season game as a play caller. Some things weren’t executed properly but that’s not on him.

Baker Mayfield had a good game with 297 yards and two touchdown passes. The interception was his only mistake and he has to learn not to throw it across his body because usually it’s not going to end very well.

Duke Johnson was utilized properly and it’s amazing that it took eight games and a coaching change for get him involved offensively.

Johnson had nine catches for 78 yards and two touchdowns and kudos to Kitchens, who was Duke’s position coach for showing former head coach Hue Jackson and offensive coordinator Todd Haley how to utilize the talent you have at your disposal.

Nick Chubb had another strong performance with 85 yards and a touchdown on 22 carries. David Njoku, Antonio Callaway and Jarvis Landry had at least 50 yards receiving each and Breshad Perriman was incorporated into the offense as well with two catches for 36 yards and also two carries for nine yards.

The offense does have some talent, it’ll be interesting to see how Kitchens and Mayfield utilize it all throughout the final seven games of the season.

Defensively, it clearly was a struggle coming into the game without linebacker Joe Schobert and safety Damarious Randall, who were inactive with injuries.

It made matters worse when starting cornerbacks E.J. Gaines (concussion) and Denzel Ward (hip) exited the game early with injuries and Christian Kirksey (hamstring) went down late in the second quarter.

It’s unclear if Ward and Kirksey’s injuries are serious but I’m sure we’ll get an update on Monday. Gaines made his return to the field Sunday after missing the last two weeks with a concussion. Suffering another one isn’t a good sign for Gaines’ long-term health as well as his football career.

The Browns will be back next week to face the Atlanta Falcons (4-4) who are on a roll right now, winning three in a row after starting the season 1-4.

Matt Ryan is playing at an MVP level and much like Mahomes, he has a ton of weapons on offense including Julio Jones, Calvin Ridley and Tevin Coleman to put points on the scoreboard.