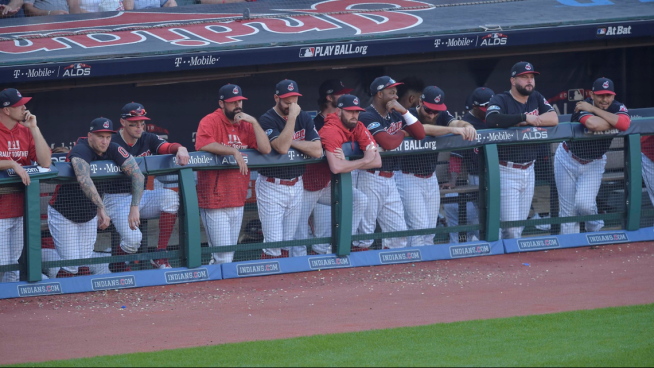 We’re under 24 hours from the end to the Indians season and whether people want to admit it or not, there’s big questions surrounding the future of the organization.

A lot of change is coming and some change might not be expected.

There’s a long list of free agents and there’s already talk of players that are projected to be on the 2019 roster potentially being moved during the winter.

Let’s discuss some of those looming questions

Who should be brought back among the upcoming free agents?

Here is the list of upcoming free agents for the Indians

I believe Carrasco will definitely be back especially at that price tag because he could far exceed that on the open market. Guyer will likely be back because it’s a cheap, depth option for the Tribe in the outfield and he’s been a good locker room guy since joining the team in 2016.

The way Miller and Allen pitched during the season and especially during the postseason, I don’t expect them to return unless it’s for what the Indians want to pay them.

Tomlin and Chisenhall have been with the team for a long time coming up through the farm system.

Chisenhall missed most of the season with injuries so he could likely come back on a one-year deal. Tomlin has been here through the good and bad times of the organization but he took a big step down this season so it would likely mark the end of his run in Cleveland.

Cabrera, Davis and Perez shouldn’t command a large salary so if they’re wanted back in Cleveland, I could easily expect those guys back for at least spring training.

Brantley will be the one to watch out of this group. I’d expect the Indians to place the qualifying offer ($17.9 million) on him and try to sign him to a multi-year contract. Spotrac projects Brantley’s contract to be around $19.2 million per year on a four year deal.

The Indians stuck by him through his injuries and he returned the favor by performing at an All-Star level when he was healthy. He’s 31 years old and still has a few prime years left, it’d be nice to see the Indians get a deal done with him.

Shortstop Francisco Lindor is entering the arbitration portion of his contract, which runs through the 2021 season.

The Indians talked about a long-term deal with the three-time All-Star prior to the 2017 season that was reportedly worth $100 million but it was turned down.

The soon to be 25-year-old and his representation have to know that his next contract will be a big one and with the way he’s performed in his three and a half seasons, it could be one of the biggest in baseball history.

Cleveland needs to try and talk with Lindor once again about a long-term deal. I know what Lindor’s side is likely asking for and it might be out of the team’s price range but that shouldn’t stop the two sides from at least having lengthy discussions throughout the offseason.

If the two sides can’t reach a deal, I wouldn’t want the Indians to start shopping him this offseason but in between the 2019 and 2020 seasons would be the best time to start looking to trade Lindor because if the Indians can’t afford him, they need to get the best trade package possible to avoid a situation like Baltimore had with Manny Machado where they didn’t get a great package or Washington with Bryce Harper where they could potentially get nothing in return if he leaves in free agency.

Now I am by no means suggesting that the team should trade the two-time Cy Young Award winner but I wouldn’t be shocked if we heard some buzz about that topic during the offseason.

Tuesday morning on 02.3 The Fan in Cleveland, longtime Cleveland sports personality Bruce Drennan told Ken Carman and Anthony Lima that he is almost positive that the team will look to see what they could get in a trade for Kluber during the offseason.

Kluber is 96-55 with a 3.09 ERA and 1,423 strikeouts during his eight years with the Indians during the regular season but has struggled in the postseason especially in his last four starts going 0-2 with a 10.20 ERA and giving up nine home runs.

He has one-year left on his contract which is paying him $15 million next season and then two club options worth $15.5 million in 2020 and $16 million in 2021. An absolute team friendly contract.

Drennan told Carman and Lima that he thinks a team would give up a solid package of players in exchange for Kluber despite his postseason struggles because he’s still one of the top 3 pitchers in baseball.

Kluber will be 33 years old come next April and you have to wonder how much more he has left in the tank because he’s dealt with injuries in each of the last two seasons during the season and of course his shoulder and back that he dealt with during the Yankees series last year.

Again, I’m not saying trade Kluber but don’t be shocked if his name comes up in trade rumors.