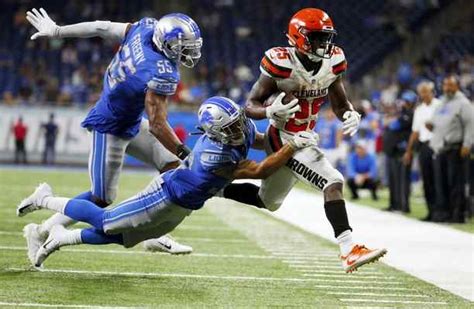 The Cleveland Browns have elevated running back Dontrell Hilliard from the team’s practice squad. To make room on the roster, the team waived cornerback Jeremiah McKinnon.

McKinnon was promoted to the active roster last week when cornerback Terrence Mitchell was placed on injured reserve. If he clears waivers, the Browns will likely put him back on the practice squad.

Hilliard spent training camp/preseason with Cleveland as an undrafted rookie out of Tulane.

In the preseason, Hilliard had 30 carries for 82 yards (2.73 yards per carry) with his longest run going for 13 yards. He also had two catches for 28 yards and three kick returns for 69 yards.

Cleveland has been trying to find a solution in the return game as Jabrill Peppers has been struggling and the team not wanting to put rookie Antonio Callaway back there full-time with his inconsistent hands and the uncertainty at the wide receiver position.

Peppers is averaging 21.25 yards per kick return and 5.44 yards per punt return  with eleven fair catches so far this season.

Hilliard was clocked at a 4.42 at his pro day but if you watch his highlight tape, he has the ability to make guys miss and it seems like he plays a lot faster than that 4.42 speed.

The Browns are sitting at 2-2-1 currently and I bet there is a belief inside the organization that if the special teams unit was just a tad better, their record would be better then it is currently. Hopefully Hilliard can provide a spark in the return game because it couldn’t be much worse.