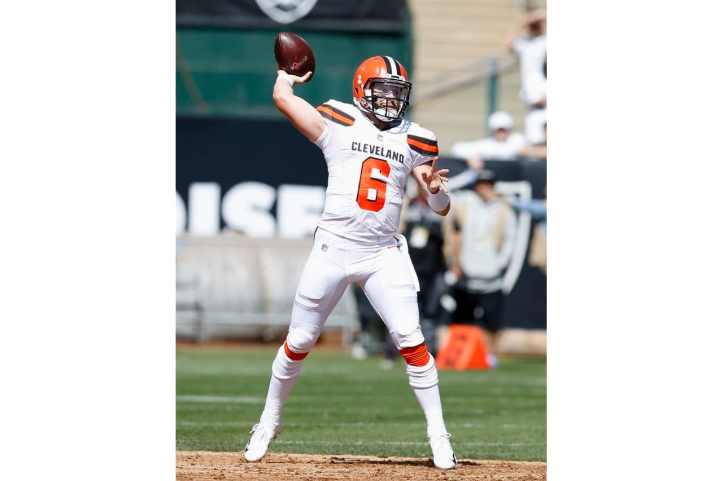 The Cleveland Browns (1-2-1) went down to the Oakland Raiders (1-3) 45-42 in overtime in what will be a game surrounded by controversy.

Cleveland took a 42-34 lead with 4:20 left in the fourth quarter following a 41-yard touchdown run by Nick Chubb.

This came after Oakland punted following a sack by Myles Garrett and Genard Avery to Derek Carr. Carr fumbled the ball and Larry Ogunjobi recovered it and was on his way to a touchdown but the referees said Carr didn’t fumble. This wasn’t the first controversial call.

After Oakland turned the ball over on downs with 1:51 left in the fourth quarter, Cleveland ran the ball three times. On 3rd & 2 at their own 17-yard line, Hyde ran the ball and it appeared to cross the first-down marker but after a review, the officials overturned the call and marked the ball short.

Oakland got the ball back and marched down the field in 58 seconds to tie the game and send it to overtime. Rookie kicker Mike McCrane kicked a 29-yard field goal after missing two kicks earlier to give the Raiders their first win of the season.

This spoiled the first start of Baker Mayfield and Cleveland’s highest scoring effort in over 11 years.

The first overall pick got off to a rough start with two drops on his opening drive and then after a ball went off Antonio Callway’s hands on the second drive, Gareon Conley intercepted the ball and took it back for a touchdown to give Oakland an early lead.

Mayfield settled back in thanks in large part to Chubb who also had a 63-yard touchdown early in the second quarter. Chubb finished the game with 105 yards and two touchdowns on 3 carries, the first Browns player to run for multiple 40-yard touchdowns in a game since Jim Brown in 1963.

Mayfield finished the game 21 of 41 for 295 yards, two touchdowns and two interceptions. He also fumbled twice.

His completion percentage would’ve been higher but with multiple drops by his receivers, it lowered his percentage. Despite the turnovers, Mayfield moved the offense down the field for the majority of the game and showed his arm strength, accuracy, ability to get the ball out quickly and also to extend plays.

Carlos Hyde added 82 yards rushing on 22 carries and his fifth rushing touchdown of the year. Cleveland rushed for 208 yards on 31 carries.

Rashard Higgins led the way receiving with four catches for 61 yards. Antonio Callway despite having a difficult day had 3 catches for 54 yards including a 59 yard catch and run that set up Hyde’s touchdown.

Darren Fells caught Mayfield’s first NFL touchdown on a 49-yard catch and run. Jarvis Landry caught the other passing touchdown and had 4 catches for 34 yards, breaking his 19-game streak of at least five catches a game.

While many want to point the finger at the officials for costing the Browns the game, the defense deserves just as much blame for the loss.

While they forced two more turnovers to give them 13 takeaways on the season matching the total from last year in already four games, the defense gave up 45 points and 565 offensive yards.

Marshawn Lynch still has a lot left in the tank in his 11th NFL season. He rushed for 130 yards on 20 carries including a 52-yard run in the third quarter that helped set up a McCrane field goal early in the fourth quarter.

The Browns defense lost Terrance Mitchell early in the game and potentially lost him for the remainder of the season. Hue Jackson told reporters that Mitchell broke his forearm and could have season ending surgery. When he exited the game, you could see a shift in the defensive performance.

Mitchell had been an excellent addition to the secondary performance and now eyes are shifted to E.J. Gaines and T.J. Carrie who were also added during the offseason and will need to step up in Mitchell’s absence.

The Browns will head back home to Cleveland next weekend as they take on the Baltimore Ravens.