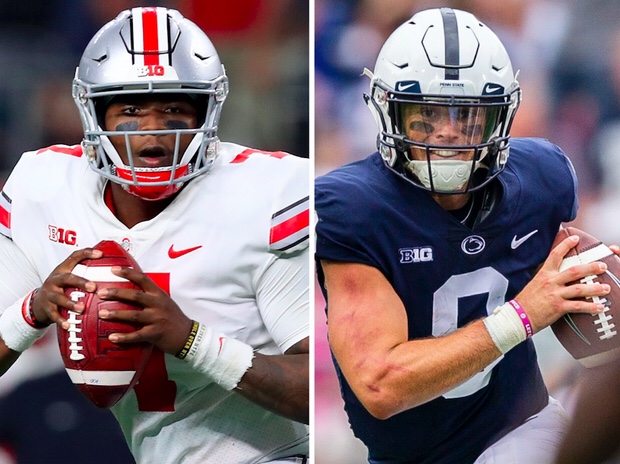 Ohio State travels to Happy Valley to take on Penn State tonight at 7:30.

This marks the second game since head coach Urban Meyer has returned to the sidelines. It’s safe to say this may be his biggest test all year.

Both Ohio State and Penn State come into today’s game at (4-0). The Buckeyes are ranked 4th while Penn State is ranked 9th.

The Buckeyes are without star DE Nick Bosa. Huge blow to this defense, as he is considered one of the best if not the best player in college football. Chase Young’s time is now. If the Buckeyes want to win this ball game they have to put pressure on Trace McSorley.

McSorely is one of the best quarterbacks in the nation throwing eight touchdowns and only two interceptions so far this season. He’s also rushed for eleven touchdowns.

Through film studies the Buckeyes need to pressure him early, he’s struggled with accuracy this season completing 54% of his passes.

Without Bosa, I’m calling on Chase Young to fill his role and put hits on him early. If the defensive line can push through their offensive line it will cause McSorley to make mistakes.

Offensively it’s no surprise who the Buckeyes lean on, Dwayne Haskins.

Just an opinion, but I believe Haskins is the best QB in college football. He’s thrown for 1,194 yards, has completed 76% of his passes and has thrown 16 touchdowns to just 1 interception.

He’s never seen a crowd like he’s going to see tonight, it’s essential the Buckeyes get him comfortable early in this ball game.

How do they make him comfortable? Run the ball!

Mike Weber and JK Dobbins must get the short yards to open up plays down the field. Penn State has looked rough defensively thus far but I can guarantee they’ll be ready tonight.

If the Buckeyes can open up the run game to give Haskins opportunities through the air they’ll be in very good shape tonight.

I truly believe Ohio State is the better football team. Not having Nick Bosa on the line is obviously scary to think about but this defense is an issue. Even more when Bosa is on the field, and now that he’s not on the field. This team is going to face a very good football team, along with one hell of a crowd. Tonight we learn what these Ohio State Buckeyes are all about.