The Browns are potentially shuffling the offensive line again 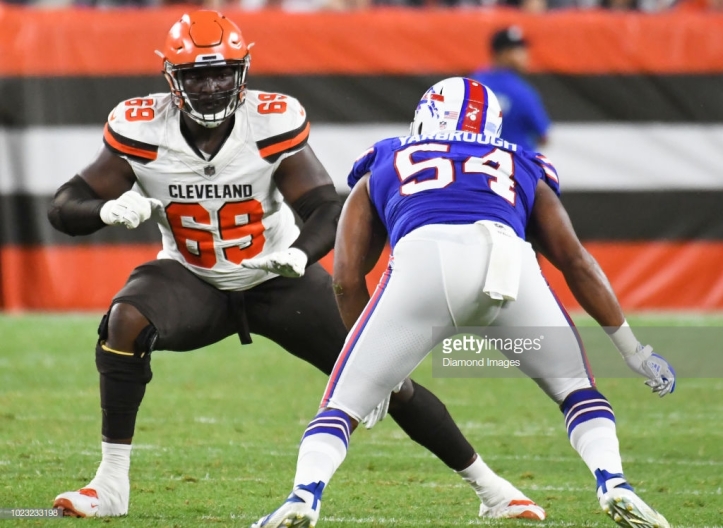 We’re days away from the season opener for the Cleveland Browns and perhaps another change is coming at the left tackle position.

The Browns have been searching for the next player to take Joe Thomas’ position since the future Hall of Famer retired in March.

Originally Shon Coleman was the man throughout the spring and the beginning of training camp until they replaced him with Joel Bitonio who transitioned from guard to tackle and did pretty well in his transition during the preseason while also being a mentor to rookie Austin Corbett who is transitioning from tackle to guard much like Bitonio did coming out college four years ago.

Browns head coach Hue Jackson stated during his conference call last Friday that he’s still evaluating the offensive line and wants to put the five best offensive lineman out there.

That includes the idea of starting undrafted rookie Desmond Harrison at left tackle and sliding Bitonio back to left guard.

Harrison’s story is a very interesting one to read about. He attended community college after high school before joining the Texas Longhorns but never played a game after being suspended three times during the 2014 season and not being able to join the team for the 2015 season.

He spent two years away from football before resurfacing at West Georgia last season. Harrison went to the Senior Bowl and the NFL Combine and turned some heads but still went undrafted which obviously was a blessing to Cleveland who signed him following the draft.

Harrison missed the first two weeks of camp while on the PUP list with a toe injury. Had the injury not happened, he may be the starting left tackle without any of this potential controversy.

At 6’6, 295 lbs, Harrison has great size and athleticism to be a left tackle but some look at him as still very raw as a prospect. I think he could be ready at some point during the season to step in at left tackle but I’m not sure if Week 1 against Pittsburgh is the right move.

Of course I don’t know what’s going on in Berea and how the coaches are truly handling this situation but to shuffle the offensive line days before the season opener seems like a total panic move by Hue Jackson.

Unless behind the scenes the team is working on potential scenarios such as moving Harrison to left tackle and Bitonio to left guard then they need to stick with the current projected lineup of Bitonio, Corbett, Tretter, Zeitler and Hubbard.

Corbett was the 33rd overall pick in the draft and he’s learning a new position. The best thing for him right now is that he has two veterans in between him that he can lean on during the transition with Bitonio and Tretter.

Coach Jackson hasn’t made his decision public but he likely will later this week.