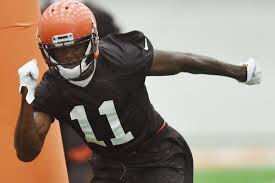 Browns wide receiver Antonio Callaway was cited for possession of marijuana as well as driving with a suspended license Sunday morning.

Tony Grossi of ESPN Cleveland was the first to report this story.

Callaway was stopped by Strongsville Police around 3 am early Sunday morning for a traffic violation according to the police report.

That’s when police found out he was driving with the suspended license and found a ”small amount” of marijuana that was enough to warrant a minor misdemeanor charge.

Callaway is scheduled to appear in court at 9:30 am on Thursday.

This is, unfortunately, another bump in the road for the rookie out of Florida. He missed all of last season for being involved in credit card fraud with other teammates at Florida and in February at the NFL Scouting Combine, he had a diluted sample during the drug test.

This is also not a good look for the Browns who just traded wide receiver Corey Coleman to the Buffalo Bills on Sunday evening and have a lot of unknown at the position outside of Jarvis Landry while they wait for the return of Josh Gordon.

Callaway was promoted to the first-team offense on Monday and was out on the field Tuesday afternoon for practice.

The team released the following statement

“We’re aware of the citation are in the process of gathering more information and will comment further at the appropriate time.”