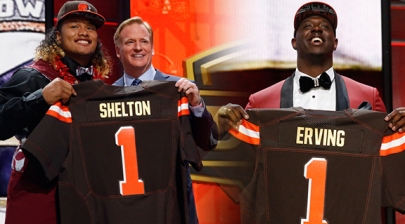 The Cleveland Browns were one of the intriguing teams to watch leading into the first round of the 2015 NFL Draft. With two first round picks, people expected them to make a big splash. Whether it was trading up for Oregon quarterback Marcus Mariota or possibly drafting one of the top running backs in Todd Gurley or Melvin Gordon III. No one had a real clue as to what the Browns planned to do. After the first round, it seems like Ray Farmer did what you should always do on draft night, stick to the board.

When the Browns were put on the clock with the 12th overall selection, it was the perfect dream scenario for Browns fans. Browns got to choose between Louisville wide receiver Devante Parker and Washington nose tackle Danny Shelton. In my opinion, the Browns couldn’t go wrong with either selection. They went with Danny Shelton which got a mixed review from Browns fans on social media. I can understand some frustration that the Browns skipped out on a big time playmaker in Parker but I believe people will be happy with Danny Shelton. At 6’2 and 339 lbs, Shelton is a massive powerful athlete who is going to be the run stopper we need on defense after finishing last against the run last season. The term “defense wins championships” still holds true in the NFL and the Browns need a guy like Shelton in their defense to be considered one of the elites.

Then with the 19th overall selection, the Browns had a ton of great options to select from. Pass rusher Bud Dupree from Kentucky and wide receiver Breshad Perriman from Central Florida were there and many believed the Browns would take one of those players. The Browns shocked many people and took Cameron Erving, offensive lineman from Florida State. Erving is a versatile guard who can play any of the positions on the offensive line. I think this season he’ll be playing either right guard or right tackle but don’t be surprised if he’s the center of the future if Alex Mack decides to opt out and leave once the 2015 season concludes.

I believe the Browns did the right things on day 1 of the draft. Yes, they didn’t go out and make the “sexy” pick everyone wanted them to. But, Browns general manager Ray Farmer stuck to his morals and his beliefs and he stayed true to the board. It’s what he did from the second round on last year and he came out with good players in Joel Bitonio, Christian Kirksey, Terrance West and Pierre Desir. I expect Farmer to do the same for the rest of the 2015 draft. Stay true to the board and select the best player available. I give the Browns an A for the first round of the 2015 NFL Draft.