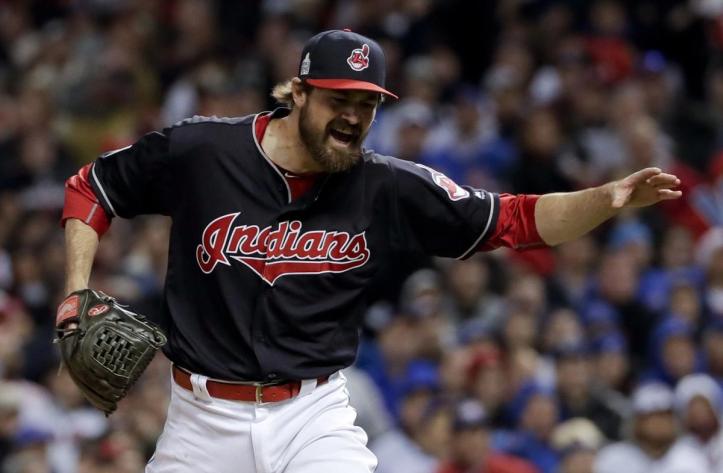 Former Indians reliever Andrew Miller is expected to sign a multi-year deal with the St. Louis Cardinals according to multiple reports. It was first reported by Ken Rosenthal of the Athletic.

He was not expected to re-sign in Cleveland after spending the last two and a half seasons with the organization.

Miller was the big trade deadline acquisition Cleveland made at the 2016 deadline to bolster the bullpen when the Indians sent prospects Clint Frazier and Justus Sheffield to the New York Yankees for the at the time 31-year-old left handed reliever.

The trade paid off immediately as down the stretch as Miller went 4-0 with three saves and a 1.55 ERA in 26 appearances in the 2016 regular season.

Then he went on one of the most dominant postseasons by a reliever in baseball history.

In ten appearances against Boston, Toronto and Chicago, Miller went 2-0 with five holds and a save in that postseason. His first eight appearances he gave up no runs in fifteen innings of work with 27 strikeouts.

Miller was named the 2016 ALCS MVP after pitching in four of the five games and pitching 7.2 innings, giving up three hits and striking out 14 batters as the Indians won the American League pennant.

In Game 4 of the World Series, he gave up his first earned run of the postseason in two innings of work in a 7-2 Cleveland win. In Game 7, he pitched 2.1 innings and gave up four hits, two earned runs in a game that Chicago ended up winning 8-7 in 10 innings.

His 2017 season was solid with a 4-3 record, 27 holds, two saves and a 1.44 ERA in 57 appearances and was named a All-Star. He did spend time on the disabled list towards the end of the regular season with a knee injury.

In the ALDS against the Yankees, he appeared in four of the five games pitching five innings, giving up one hit which was the solo home run by Greg Bird in Game 3 that was the only run in the game as the Yankees won 1-0.

2018 was just not the right year for Miller from beginning to end. He struggled with injuries and just didn’t look right at all throughout the season.

It was also his worst season as a reliever going 2-4 with two saves and a 4.24 ERA in 37 appearances. He made two appearances in the ALDS against Houston pitching only 0.1 innings giving up one hit and walking three of the five batters he faced as it appeared he had no control which made you wonder if he was 100% healthy.

Now he heads to St. Louis to try and get his career back on track while helping the Cardinals get back into contention as they’ve made some big moves this offseason with the acquisition of All-Star first baseman Paul Goldschmidt and now Miller and should be a serious contender in the NL Central in 2019.