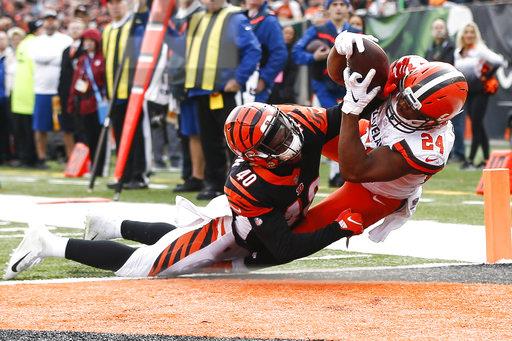 The Cleveland Browns scored 28 points in the first half and never looked back as they defeated the Cincinnati Bengals (5-6) by a final of 35-20 to improve to 4-6-1 on the season.

It’s the first time since Weeks 8-10 in the 2014 season where they’ve won consecutive games and they snapped a 25 road game losing streak, the second longest in NFL history.

Baker Mayfield was fantastic once again as he became the first Browns quarterback to throw four touchdowns in a game since Brady Quinn did in November 2009 against the Detroit Lions. Mayfield was 19 of 26 for 258 yards and those four touchdown passes and it looks like he’ll collect another Rookie of the Week award later this week for his efforts.

Nick Chubb also had another impressive performance with 28 carries for 84 yards and a touchdown. He also added 3 catches for 44 yards and this impressive receiving touchdown late in the second quarter.

Going up 35-7 early in the third quarter, the team noticeably took their foot off the gas and it showed once Andy Dalton injured his thumb and was forced out of the game and Jeff Driskel was forced to step in at quarterback and led the Bengals on two scoring drives to cut the deficit to 15.

The Browns defense played a good ball game although they had a tough time stopping Joe Mixon who had 155 yards from scrimmage (89 rushing, 66 receiving) but they collected another turnover when Damarious Randall intercepted Andy Dalton in the first half and decided to give the ball to former head coach Hue Jackson, who now is an assistant to Bengals head coach Marvin Lewis.

DAMARIOUS RANDALL HANDED THE BALL HE PICKED OFF TO HUE JACKSON WHAT A SAVAGE. #Browns pic.twitter.com/YPOjK6bTmT

The Browns are riding a wave of momentum but I didn’t like that they took their foot off the gas in the second half and allowed Cincinnati to attempt a comeback. I know you don’t want to risk injury but you also can’t allow your opponent to have hope because once they start to build momentum and confidence, it’s hard to break it.

It’s still way too early to be looking at the playoff picture but the Browns are still technically “In The Hunt” and sit 1.5 games behind Baltimore for the second Wild Card spot.

They will travel down to Houston next week to face the AFC South leading Texans who have won seven in a row after starting the season 0-3. Emotions are running high in Houston as the team is dealing with the loss of their owner Bob McNair who passed away on Friday at the age of 81.

Everyone will be focused on the marquee matchup at quarterback between Baker Mayfield and Deshaun Watson, this should make for a fun matchup next weekend.