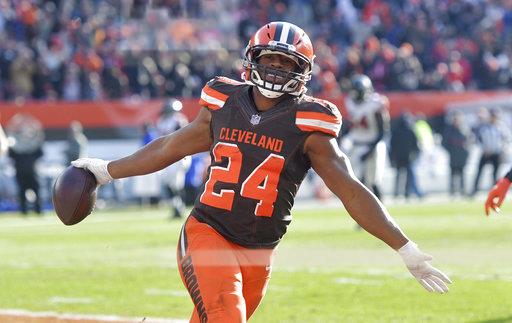 It was the Baker Mayfield and Nick Chubb show offensively as the rookies went out and dominated the Falcons defense from start to finish.

Mayfield continues to build momentum as also widen the gap between himself and the other rookie quarterbacks. He finished 17 of 20 for 216 yards and three touchdowns with a 151.3 quarterback rating.

Over the last four games, Mayfield has completed 68.9% for 908 yards (227 yards per game), nine touchdowns and only two interceptions. Interim head coach Gregg Williams told reporters he told Baker to “cut it loose” and be aggressive. It looks like he’s doing just that is continuing to trend up.

Nick Chubb is also continuing to trend up. The second-round pick out of Georgia silenced any critics remaining that questioned why the Browns traded Carlos Hyde a few weeks ago with a career high 176 yards on 20 carries (8.8 yards per carry) and this franchise record 92-yard touchdown run in the third quarter.

MAMA, THERE GOES THAT MAN! pic.twitter.com/hfDQ3wDr0s

Chubb also added three catches for 33 yards and a touchdown to give him 209 yards from scrimmage on 23 touches.

It’s going to be very interesting how the fan base decides to vote for Rookie of the Week this week because I would guarantee both Mayfield and Chubb will be on the ballot.

The defense also played a huge role in the team’s victory as they limited the high-powered Falcons offense to just 16 points. Atlanta did gain 382 yards on the ground but Cleveland stepped up at the goal line and kept them out of the end zone enough to win.

The Browns did get two more turnovers to add to their total of now 25 turnovers on the season. T.J. Carrie and Jamie Collins both recovered fumbles to get those turnovers.

Carrie played his best game of the season with six tackles, two pass deflections and the forced fumble and recovery. He has struggled throughout the season but hopefully a performance like today will be something he will build on for the final six-game stretch.

Another player who caught my eye in terms of a good performance was Briean Boddy-Calhoun who also had two pass deflections and also made five tackles. He seemed to be disruptive anytime the ball was coming his way during the game and he’s another who has struggled throughout the season.

The Browns now roll into the bye week with a win and hopefully the momentum will stay on their side and they can focus on getting their players some rest, stay safe and smart and get healthy for those who have been dealing with fatigue and injuries during the first ten games.

They get back on the field after Thanksgiving when they head down to Cincinnati on November 25 to play the Bengals in the “Battle of Ohio”.