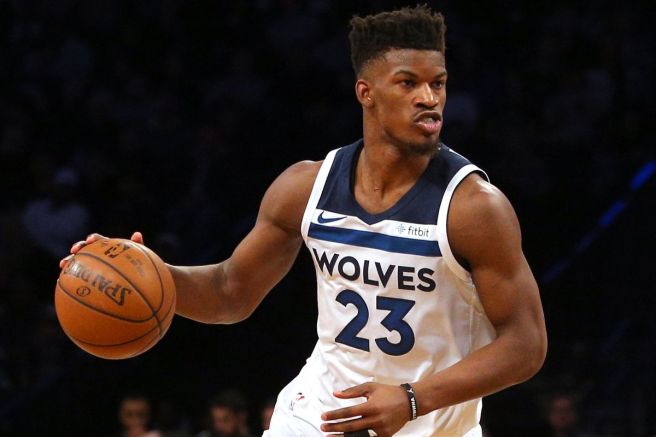 The latest superstar asking to be traded is Timberwolves All-Star guard Jimmy Butler with just days away from the start of training camp for NBA teams. Multiple teams including the Brooklyn Nets, Houston Rockets, Los Angeles Clippers and the Philadelphia 76ers have expressed interest in Butler.

Another team is also pursuing Butler: the Cleveland Cavaliers.

ESPN Sources: Another team pursuing a Jimmy Butler trade with Minnesota: Cleveland. Cavs owner Dan Gilbert was seen talking privately with Glen Taylor at NBA Board of Governors meeting on Friday. Both owners played a part in negotiating the Love-Wiggins deal.

This isn’t the first time Cleveland has expressed interest in trading for the shooting guard. Following the 2017 NBA Finals, the Cavaliers were in talks for Butler before then general manager David Griffin departed the organization during negotiations. Butler was then traded to Minnesota during the 2017 NBA Draft.

Butler has at least one-year remaining on his five-year contract with a player option that he’ll likely opt out of next summer. He’s eligible to sign a five-year “super max” contract with Minnesota or the team he will be traded to worth $190 million dollars over five years. If he signs with another team next summer, the maximum contract will be worth $141 million over four years.

He’s one of the league’s best two-way players getting it done on both offense and defense at an All-Star level but has had a history of feuding with teammates like he did last season with Karl Anthony-Towns and Andrew Wiggins. Timberwolves head coach Tom Thibodeau, who coached Butler in Chicago wanted to try to patch the relationship but owner Glen Taylor has told people that Butler will be traded.

Cleveland being involved is interesting because they have seemed to be content with the players they currently have on the roster as they move once again into the post-Lebron James era of the franchise.

The team has a mix of young talent such as first-round pick Collin Sexton along with Cedi Osman, Larry Nance Jr. and Jordan Clarkson along with veterans Kevin Love, Tristan Thompson, Kyle Korver and J.R. Smith.

They also lack some assets as they currently don’t own their 2019 first-round pick as it’s held by the Atlanta Hawks although it’s lottery protected. The next first-round pick they can trade would be in 2021.

It’s unknown how likely a deal between Cleveland and Minnesota is but if the Cavs were to acquire Butler, it would put them into playoff contention with Butler and Love as their 1-2 punch.

It would also fuel speculation about a potential reunion between Cleveland and Kyrie Irving.

Speculation during the summer has been that Kyrie Irving and Jimmy Butler would like to team up together next summer when both are slated to become free agents. Irving asked and was granted a trade out of Cleveland next summer when the team traded him to Boston.

Not trying to look too far ahead but a trio of Kyrie Irving, Jimmy Butler and Kevin Love would be something to watch and I think would help ease the pain of Lebron leaving Cleveland for Los Angeles just a little bit.