The Cavs had a successful season 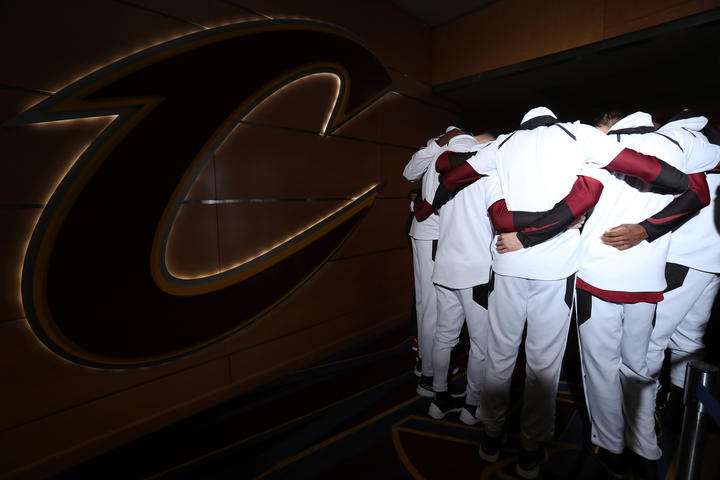 While the Cleveland Cavaliers were swept in the 2018 NBA Finals by the Golden State Warriors, people should look back at this past season and consider it a success for the franchise.

I know some people may look at that statement and have a confusing look or comment back saying that getting swept in the championship round shouldn’t mark the season as a success but you have to look at how the Cavaliers got there.

Go all the way back to twelve months ago following the Cavaliers loss to the Warriors in the 2017 NBA Finals, Lebron James told Kyrie Irving as they walked through the tunnel back to their locker room in Oracle Arena, “We’ll be back”.

A few weeks later, the team let general manager David Griffin’s contract expire while he was in the middle of trade negotiations for All-Star guard Jimmy Butler and left the operations of the franchise in the hands of Koby Altman who had never been the head of basketball operations before.

After failed trades to land Butler and All-Star forward Paul George, the Cavs were left empty handed at trying to upgrade the roster to try and close the gap on Golden State.

It would widen when Kyrie Irving requested a trade in mid-July and the team granted him that request when they dealt him to Boston for Isaiah Thomas, Jae Crowder, Ante Zizic and Brooklyn’s first round pick. The Cavs also added Jose Calderon, Jeff Green, Cedi Osman, Derrick Rose and eventually Dwyane Wade in free agency.

The season started off a little rocky with a 5-7 record before they ripped off a 13 game winning streak and 19 out of 21 games to have a 24-9 record rolling into Christmas and that was without Isaiah Thomas who was recovering from a hip injury he suffered in Boston.

Thomas returned to the court in early January and while he showed he was the scorer he had been in Sacramento, Phoenix and Boston but his inability to play defense and him causing a problem in the locker room soured his tenure in Cleveland.

It wasn’t just Thomas, allegedly Wade joining his friend Lebron James rubbed some in the locker room the wrong way in addition to Derrick Rose taking a sabbatical during the season questioning his desire to continue playing basketball.

The Cavaliers were sitting at 31-22, still third in the East but only 4 games ahead of the final playoff spot and it was clear as day that the team needed to make moves at the trade deadline.

Cleveland sent Thomas, Wade, Shumpert, Crowder, Rose and Channing Frye out in three separate trades and acquired Jordan Clarkson and Larry Nance Jr from the Lakers, George Hill from Sacramento and Rodney Hood from Utah right before the trade deadline to overhaul their roster.

The team’s drama seemed to be left behind at the deadline and they refocused towards a playoff run. Cleveland went 19-10 after the trades and finished with a 50 win season, only one off their win total from the previous season with Irving on the roster. They finished fourth in the Eastern Conference.

Cleveland faced Indiana in the first round and they had to fight and scratch through all seven games to get past them.

Lebron James was dominant averaging 34.4 points, 10 rebounds and 7.7 assists per game but the supporting cast did not perform well throughout the series with Kevin Love being the only Cavalier who averaged double figures in scoring. Tristan Thompson was a non-factor until Game 7 when he had 15 points and 10 rebounds to help lift Cleveland to the next round.

Cleveland got the top seed in the East in Toronto for the second round. The supporting cast stepped up to help Lebron with five players averaging in double figures behind Lebron’s 34 points, 8.3 rebounds and 11.3 assists per game and took care of the Raptors in a clean sweep of four games.

The rematch of the 2017 Eastern Conference Finals between the Cavs and the Celtics happened and it was a lot better this time around as you could see the growth of the Celtics’ youth in Jayson Tatum and Jaylen Brown who helped Boston push the Cavaliers to the brink of elimination.

Lebron James stepped up in the final two games and brought his game once again to another level with a 46 point, 11 rebound and 9 assists performance in Game 6 to force a Game 7 in which Lebron played all 48 minutes and scored 35 points to send the Cavaliers to their fourth straight NBA Finals appearance.

However, the season came to a somewhat disappointing ending as they were swept by the juggernaut Golden State Warriors led by Kevin Durant and Steph Curry.

Cleveland put up a fight in Game 1 led by Lebron’s career postseason high 51 points but some questionable officiating, a missed free throw by George Hill and a miscue by J.R. Smith led to a collapse in overtime which Golden State capitalized on.

Golden State blew out Cleveland in Game 2 but the series shifted back to Cleveland which gave fans one last gasp of hope. The Cavs got off to a hot start in Game 3 but Kevin Durant got hot and stayed hot en route to a 43 point performance and a victory for Golden State. Game 4 was never close and the Warriors blew out the Cavs by 23 points to clinch the championship.

The ending wasn’t the way Cleveland wanted to finish the season but the fact that they got to the spot they were in was an amazing accomplishment if you followed the team all season long. With all the drama and controversy and a roster overhaul in the middle of it, members of the team including Lebron James even said that they didn’t know if they’d get back to the Finals.

Cavs owner Dan Gilbert said after the team won the Eastern Conference championship that this one was the most satisfying because of everything the team went through and Lebron James said that it had felt like it was five or six seasons put together into one.

It was a memorable season and if it was the last one of successful Cavaliers basketball for a while, it was well worth the ride.