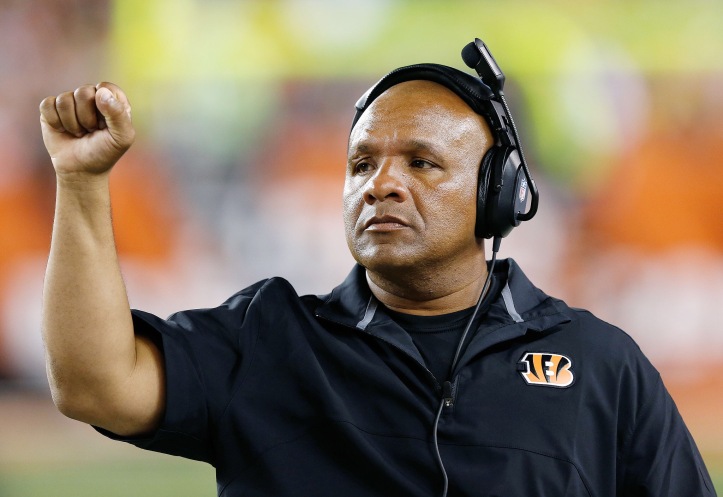 The search is over.

After a ten day search with interviews with seven different candidates, the Cleveland Browns have found their next coach. Adam Schefter reported Wednesday afternoon that the Browns and Cincinnati Bengals offensive coordinator Hue Jackson were finalizing a deal to become the 16th head coach in franchise history. Jackson first interviewed with the team Sunday afternoon and interviewed once again on Tuesday evening. No offer was made and Jackson was allegedly heading to New York to interview with the Giants but he told people close to him he wanted either the Browns or the San Francisco 49ers head coach position.

Hue Jackson has been a football coach for 29 years and an NFL coach for 15 years. His NFL career started with the Washington Redskins as a running backs coach. He’s been an offensive coordinator with the Redskins, Atlanta Falcons, Oakland Raiders and Cincinnati Bengals. In 2011, he was named the head coach of the Oakland Raiders. He made the trade that brought quarterback Carson Palmer to the Raiders from Cincinnati and coached the Raiders to an 8-8 record but was fired after the season due to new management coming into the organization. The last two seasons he’s been with the Bengals as the offensive coordinator where he is credited with helping Andy Dalton become one of the top quarterbacks in the NFL and also helping second year quarterback AJ McCarron develop to be a starting caliber NFL quarterback.

I love this hire by the Browns, many were worried including myself that the organization  wouldn’t be able to lure a top notch candidate to replace Mike Pettine due to the team’s alleged “toxic” environment. Getting their top choice is a huge win for the organization which I think could be thanked in part to the search firm Korn Ferry helping during the process. Many wondered if New England Patriots defensive coordinator Matt Patricia was the team’s top choice due to his analytic background but that wasn’t to be the case.

It’ll be interesting going forward what Jackson will do with this Browns roster. He will reportedly have a huge say in personnel. Of course the quarterback position will be the one to watch due to Jackson’s history with the position. Many are already linking the Browns to Cal quarterback Jared Goff with the 2nd overall pick in the NFL Draft in April. I would also watch for 49ers quarterback Colin Kaepernick who may be released and become a free agent this offseason. Jackson lobbied for the Raiders to take him in the 2011 NFL draft but they didn’t have enough ammo to trade up for him. Current Browns quarterback Johnny Manziel’s time in Cleveland is officially over as far as I’m concerned, Fox Sports reported that Jackson told the Browns that he wants the organization to move on from the disgruntled second year player. I would expect the team to either trade or release Manziel as soon as they can.